I give up, how do you turn off smart quotes in OmniGraffle 6?

This drove me nuts for a good while too. Turns out a partial solution, at least for inches, is in System Preferences, but the solution was not obvious (poor OS X UX).

It’s not a default setting, but you can type dumb quotes by using control-quote or control-shift-quote.

That was also driving me nuts but after some hits and misses I found the solution.

It seems that OmniGraffle assume the quotes replacement is always active.
So the trick here is to replace the standard quotes by the same quotes.

While editing text, you can control-click to access the contextual menu for substitutions where you can turn smart quotes on and off. OmniGraffle remembers your preference for that setting (across all documents) until you change it again using that contextual menu item. 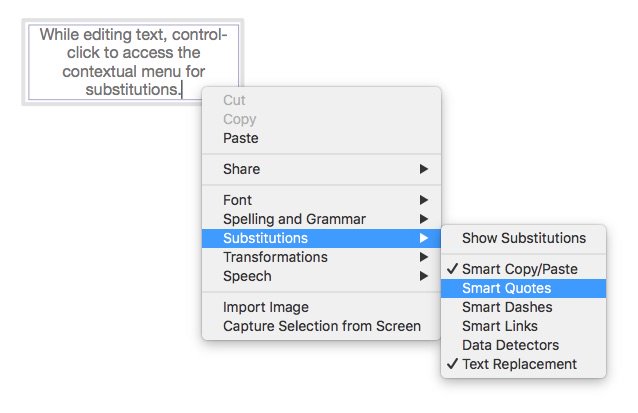 I totally overlooked contextual menus. Thanks for the solution, and as a reminder to right click when things don’t show up in (regular) menus.