Unable to create a repeating task that is deferred only

I’m working on creating a couple of single action project lists of reoccurring chores I have around the house such as vacuuming the house. What I’m wanting to do is create the task and repeat it at a set duration to be deferred. I do not want to put a due date on these tasks as they are not something that I feel needs to be accomplished within that timeframe. I don’t want the due dates so I’m not bombarded with red badge icons for things such as cleaning the spare bathroom mirror as to many makes me start ignoring the system.

The problem I’m running into is I’m trying to create it as I’m doing the task so my input device is either my iPhone or iPad. In both instances whenever I go to repeat task and select ‘defer again after completion’ option it shows an estimated defer date but also inputs a due date into the repeated task. 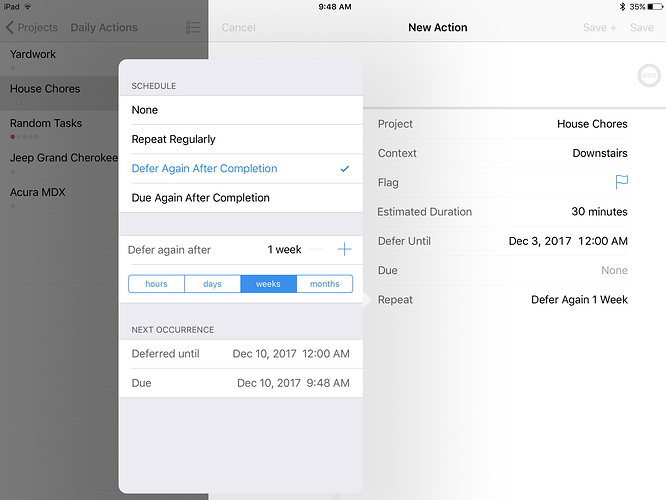 The frustrating part of this is if I’m inputting this task in the macOS version of OF it allows me to set up repeating tasks that are deferred upon completion and doesn’t add a due date in the repeating task. Am I doing something wrong when inputting tasks to do this or is this an issue other people are replicating.

Hi @bbech! I’m sorry for the confusion here. This is a bug that the OmniFocus team is tracking: the “Due” row shows a date, but when checked off, the repeated item won’t really have a due date. Instead, like the Mac version, it will only have a defer date.

Thanks for including a screenshot — it helps us isolate occurrences of these kinds of bug, so we can work on a fix more efficiently.