I added a background color to one of my notes for school and after closing the app and reopening it again, a weird shade of the background color shows up on every line of notes. The most efficient way to get rid of this is by going through the outline on my Mac and removing the highlights one by one…which isn’t very efficient at all. Is there a better way to correct the error for the entire document? Here’s an example of the problem: 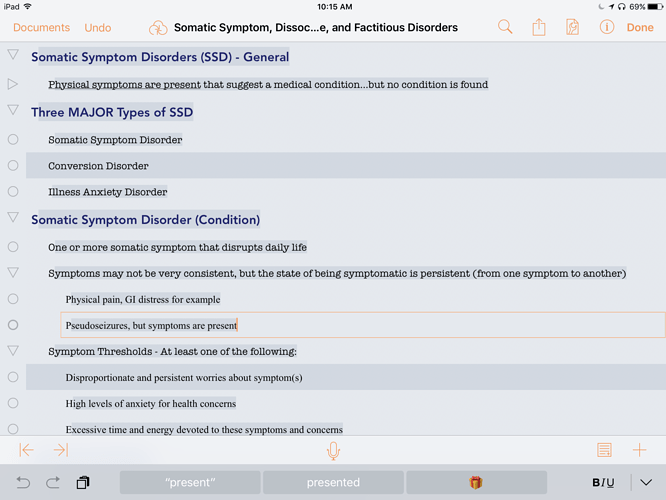 If you have Pro on the Mac, you can use a simple script to remove the background color from all rows. If you only want to remove from rows that you have first selected then you can add the word selected before rows's.

Looks like this might be the same issues we’re currently investigating. There’s some bug on in the iOS version that is adding any non-white whole document background color directly to text but it won’t be noticeable right away.

Since it doesn’t look like you have any ad-hoc styles, you can select the row and use the Clear Styles option at the bottom of the inspector. We’re hoping to have this fixed soon but we’re perplexed why this is happening.

Actually is does happen with white too. Might depend on the template.

HI everyone. As an update, the script was not successful at removing the highlights on the text.

I wrote an email and filed a bug similar to this last month. I noticed this problem in 2016 as well.

Are you using iOS along with macOS? If I edit an outline with iOS, the fields that were edited will receive the highlight. I don’t know if this bug is template related. I created my own template from scratch with the provided Blank outline, made some level adjustments, and saved my own template that I use for every outline. 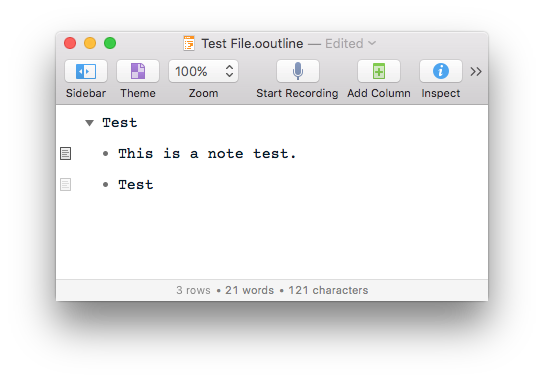 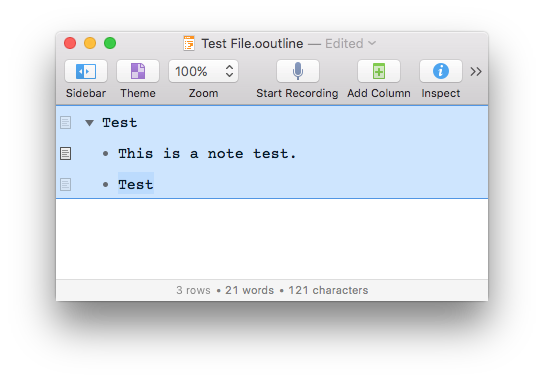 I have to highlight all then use the Clear Styles shortcut to remove it, but that’s not a good fix because if you have any rich text highlighting within the field such as bold or italicized, it will clear those too.

Here’s hoping the bug is squashed in the near future because I’ve avoided modifying my default level styles. I occasionally will highlight all and Clear Styles, so it reverts back to the level styles I originally set.

Yes, I am using both platforms, however the additional, unwanted layer of highlighting arises inconsistently. When I am taking notes in class and need to switch over to Safari for a moment, then return to OmniOutliner, the problem occurs. I use the MacOS version to correct the errors. The desktop version has never been a problem.

I’m still running into this problem, and I can’t wait for it to go away. Is anyone else still noticing it?

We fixed this bug in 2.10.2, but that only prevents new occurrences of it from happening. It will not fix existing documents as there’s no safe way to do so. If you’re seeing otherwise in brand new documents, please let us know.

Yes. Still happening. I made this document from scratch with El Capitan.

The highlighting appeared when I made new fields or notes on iOS. I had the document encrypted. I decrypted it, and it still made the highlights, so I guess that rules out encryption.

Ah, apparently we didn’t fix all of it. You probably only see this if you change the whole document background color. And unlike before, it’s only adding a clear background instead of matching the background which in the case of transparent colors would cause constant visible discrepancies.

Did you reproduce the problem too? I recall having this problem with Sierra too, so I’m not sure if it’s related to El Capitan. Tonight’s test was El Capitan though.

Yes, it has nothing to do with the mac app. It’s iOS that’s adding the style. It’s just that the mac app visually reveals this when you select the row.

Awesome! I’m glad you were able to track it down. I look forward to that bug being squashed. Is this an OmniOutliner iOS Version 2 or 3 fix?

Also, do you know how to remove the highlights in fields that contain formatting such bold and italics? If I Clear Styles it clears everything.

Can’t promise anything but it might get fixed in v2, depends on what the fix is.

I was tinkering around with the options you listed, and I got it to work by selecting the text within the field. Is there a way to select the entire outline and perform a few steps to remove the highlights?

That would remove it from the whole outline if it’s all the same color applied. I’d need to see an example to give more specific steps if it isn’t working for you.

This is hopefully completely fixed in 2.10.3 which should appear at any moment if you don’t see it yet.