What is on the 2022 roadmap for OmniOutliner?

When reading through the roadmap topics and blog posts that are linked below I could not find a lot about OmniOutliner.

@SupportHumans Do you know if there are any new features for OmniOutliner on the 2022 roadmap?

Could you please add the features mentioned below to the 2022 roadmap?

@SupportHumans Do you know if there are any new features for OmniOutliner on the 2022 roadmap?

It’s a great app with even more potential but not sure if omni support humans read this forum much.

Liked your suggestions, would love a tag function also.

It’s a great app with even more potential but not sure if omni support humans read this forum much.

There could be a chance that they read this topic. Let’s hope someone will respond.

OmniOutliner (GTD scripts) inspired the Omni team to create OmniFocus. Could this be a good reason to make OmniOutliner even better? Maybe more inspiration will come after making OmniOutliner better.

I’m curious what kind of future the Omni team does have in mind for OmniOutliner.

I’m really hoping for split views on a OO document so I can reference one section of the outline while editing another. With large outlines I find the lack of such a view feature increasingly annoying as my efficiency is negatively affected.

I would also like an “Open In Additional Window” option, similar to what BBEdit offers.

I think OO is losing some appeal as note-taking tool because of its lack of seamless integration with any drawing app.
the thing is that if we look at OO as an outliner only, of course it’s the best. point. but - do we really need an “outliner” these days? not anymore just that.

OO is wonderful but I cannot use it in design and ideation phase because its WBS breakdown does not allow me to sketch or preview linked files in a nice way.
I think that OO should develop a serious link with some lightweight external drawing apps to be able to open an infinite canvas and just draw. it could also be apple notes, but then the note should be embedded in the oo file and editable there, which is not. also links to drawings is no use if one cannot display the preview within OO and easily go back and forth.
to me, OF is a todo subset of OO.

I also think OO (and OF) still lack some smart integrations with “watched folders” and linked files that prevent them to blend into professional workflows. what if I want to create the file structure for an OO project in iCloud Drive, and link it to the OO lines with links?
in complex enterprise environments this is a must. we need to be able to blend into e.g. document management flows or cross-platform requirements, especially as macOS users.

this way OO can be a coordinator of OF and OP and an organiser leveraging its current abilities.

First off, these forums are, indeed, for customers using our apps to talk with each other. We have a great community of users, and hope you all appreciate each other as much as we appreciate you. We’re also grateful that you’ve taken the time to offer your feedback on what you’d like to see next in OmniOutliner, and we want you to know that we’ve read it!”

On the topic of the OmniOutliner feature roadmap for 2022: our longstanding tradition is to publish a roadmap in the early months of the new year. While not carved in stone (as no roadmap is), they tend to contain plans we’ve thought through, and ideas in which we have a reasonable level of confidence. Thus, a forum discussion of feature requests now (i.e. several months in advance), is a perfectly well-timed discussion for you all to have.

We can try to circle back and read the discussion. However, as always, if you would like to reach us directly and know your voice is heard, we suggest sending feature requests directly to: omnioutliner@omnigroup.com.

As far as hearing plans from us, our roadmap for 2022 will still come out the same time of year — not immediately upon return from the holidays, because we need to spool up and have discussions in house, but usually late January or very early February.

That said, OmniOutliner got a very important update last year about this time, to take advantage of the performance improvements of the M1-powered Macs. We have been very impressed with the speed of machines built on Apple Silicon, and recall Apple projected a 2-year transition back in June of 2020.

You may also recall we have announced plans to support Shortcuts on the Mac and an update for OmniOutliner will be included, of course! We hope to have that update ready on Day One, when Monterey officially ships, or at least reasonably close thereto.

We know our OmniOutliner customers are some of the most productive people in the world. We hope using OmniOutliner on an M1-powered Mac, and adding Shortcuts to our robust support for automation technologies including Omni Automation, helps keep it that way.

I just wish OmniOutliner would save my window positions like any standard Mac app.

My simple wish is that they’d finally fix the basic accessibility issues in UI. Especially ‘dark mode’ is totally broken and useless in terms of accessibility (= contrast between background and controls e.g. checkmarks on sidebar, inspector menu’s (grey on grey), the UI coloring not fine-tuned for dark mode). What’s worst, there is no option to use light mode, if system is on dark mode.
(oops…it seems this would be then on 2023 roadmap)

Here’s the 2023 roadmap. Nothing for OmniOutliner that I can see😟

Yes, this is just sad, sorry state of current UI. And these have been in for years.These should not be a big task to fix, so it seems OO is drop-out from roadmap.
Examples:
Which one is selected? 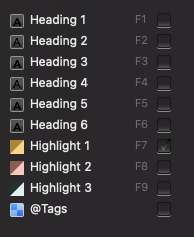 What I am selecting here? 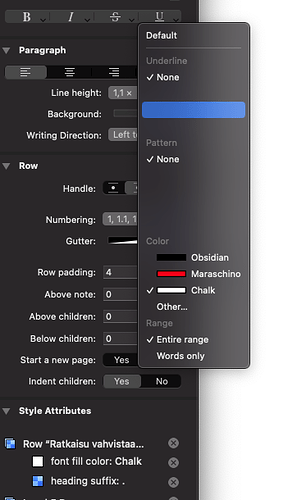