What is the purpose of three horizontal lines in the object inspector?

So basically this. What do those three horizontal lines in object inspector do? I could not figure it out by trial and error. 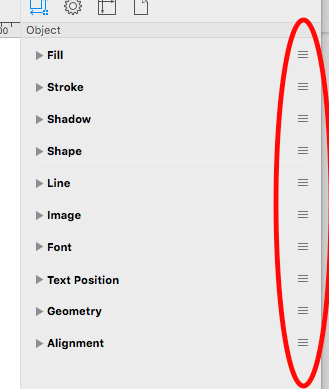 Although this is the “OmniGraffle for Mac” FORUM it might be useful to observe that these lines on iOS would allow you to reorder the items by dragging.

That’s on my Mac though.
But yes, these are the grips to reorder the menu items. I could not find it in the manual for some reason.

Glad we got there. It IS rather a convention that these are for reordering - both on Mac and iOS. So I SUPPOSE that’s why it’s not in the manual. (I’ve not searched for this therein.)

There was a release note update at https://www.omnigroup.com/releasenotes/omnigraffle-mac when it was first introduced.

If you want to read more about reordering inspectors, in the Mac manual, it is described as “Tear off” at https://support.omnigroup.com/documentation/omnigraffle/mac/7.0/en/basic-setup-and-configuration/. The section that describes this feature is under the heading “Creating a Custom Workspace from Various Inspectors”.