When will OF ever support multiuser scenarios?

I use OF today. My business is small - two people. We would like to use OF to manage our projects and tasks. Unfortunately I can’t figure out a way to effectively assign a task to the other person and still maintain visibility to it. Just like in Outlook - if I assign a task to someone else, it goes to their mail file and I no longer see it.

What we need is a central repository for projects that might be organizational wide and a per user space for personal user stuff. Anything in the central repository is visible to all members (or controlled access per project / folder / etc).

Any chance this will every happen or any recommendations on a product that would be good for the central stuff? I have looked at Asana (can’t import existing stuff from OF), Trello (doesn’t support due dates on tasks, and Base Camp ($1000 per year for two users - not happening).

Personally, I feel like this would massively balloon OmniFocus’ scope.

As for other solutions:

Neither support importing from OmniFocus, though.

Trello supports due dates only at the card (aka Project) level. Not at the task level. That is a show stopper.

Teamwork has a nice product with some serious project management features but at a steep price for a small office. Cost is over $149 per month for enough “projects”.

Asana it is… I made the transition today in less than 6 hours. Bulk of that time was spent typing in everything since they don’t support an import from anything. I liked the OF interface and mobile app way better, but looks can’t be the deciding factor. I need functionality.

As for scope… I don’t think there is a published scope for any Omni product but it would seem they are really designed for the single user, not a corporate user.

For a business that can swing the $149 - $249 per month… Teamwork would be a nice product to replace the need for task management (OmniFocus) and project management (OmniPlan).

Thank you OmniFocus for many years of good task management use…

I know it sounds like a headache but I actually use Asana for the team I am in and then use OmniFocus for my personal stuff. I really don’t want the ram to know that I’m renovating my personal kitchen and want to keep that kind of stuff outside of the team view.

It actually works better for me to keep two separat systems.

I’m grateful to OP for bringing this up. There may be other tools (better suited) for online collaboration or even reasons to actively keep personal and collaborative stuff seperate as @uupis pointed out which is all fine and all.

Personally, rather than ‘actual’ business I crave to see that multiuser support for family ‘business’. There’s stuff you want to be on top of as a couple/family and I just don’t see me and my wife using OF for our personal stuff and something like Asana for the family stuff, which is in fact a huge part of our personal stuff, so at this point with all those family responsibilities we’re in that ‘one person keeps track of x or both keep track of x in their respective systems and kind of communicate changes irregularly and unreliably so everything’s pretty messy’ in-betweeny state.

There’s also this other thread tackling that feature request that I’d like to connect this one to.

I work a lot with other people on projects. Unfortunately this is not supported within Omnifocus. Within the standard app of Apple's Reminders, they have a great method to share Task-lists (or what would be called Projects in Omnifocus). I find this a great solution. And I really hope that the Omni group would integrate this kind of feature in the upcoming versions. PS Please don't make me buy a 3.0 for this. ( I already bought 1.0 and 2.0,... it is getting ridiculously expensive). Pleas…

This is exactly my problem… more or less. We are a small family run business. Husband and wife. I don’t want to have to sort through two systems to see what I need to do since the lines are often blurred.

There is definitely a market for a product like Teamwork or Asana for small businesses. Something scalable so I could pick the features I want to add.

Unfortunately the lack of cross platform capability curtails a product like OF unless they adopt other platforms. iOS and Mac is very limited. If you want to tackle the corporate market, you need to add Android, web, and maybe Windows.

There’s nothing better for individual contributors or executive-level than OmniFocus, but a collaborative service or complete re-architecture towards an already crammed market full of at least two dozen options doesn’t strike me as a good business decision so I doubt OmniGroup is ever going to dip that way.

I usually recommend Wunderlist or Asana to people that ask for group project/tasking, RequestTracker for support/service teams, and OmniFocus if you can just ask someone what they’re working on and don’t need to watch checkboxes.

What about Todoist? You could have 2 individual accounts or a business account?

I’ve never done this and I’m sure it would be clunky but just use nested contexts to assign. “Brian: house” just set top level contexts for each person and then you have a way of perspective filtering for each.

The “Context” is used in my small business to assign a team member. I never could see a great benefit for use of “context” until I started adding names to it. 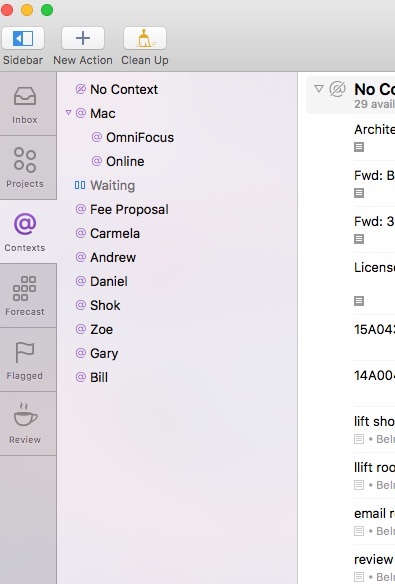 You can still have contexts for “Work” “Home” and “George and Patty” relating to the tasks you have not delegated. Mine are “Fee Proposal” and “Bill” [invoice] for instance.
https://inside.omnifocus.com/Sabra-Morris

OMNIFOCUS seems to be more powerful and suited to my style than Trello and Asana. Those who need powerful organisation are those who own or managing businesses, with more and more hiring staff in different parts of the globe, it feels like a no brainer that for OF to include collaboration so task and project lists can be shared and to open up to Android and Windows. This is one of the best apps out there and would massively benefit a lot of people on other platforms as well as many businesses around the world. it’s by far, hands down the most powerful project manager I have used. It would bring a lot of value if they could do this as well as scaling up their own profits. Would be awesome to see this!

I think there is some limited collaboration features. It is discussed here by the OmniFolks here:

We can share a task with another person and that other person can decide how to best squeeze it into their own OmniFocus database.

We ended up moving to Teamwork at $49 per month (ouch) for two people. OmniFocus is not there yet and doesn’t seem like it will ever be there. Giving a task to someone and letting them fit it is is not what we need. We need a task list and project management tool combined.

Teamwork is that, but it lacks the personal task lists like OF has. It lacks the ability to make mass changed when things get pushed. We had to weigh the pros and cons though. The ability to create a project, assign tasks, track those tasks per person… that is where Teamwork smokes OF. As a project manager, I can maintain visibility to the entire project. With OF I lose sight of it once sent to someone else.

If your needs are simple task management for one person and you don’t care to ever see it again once delegated to someone else, then OF is the king. Maybe someday I can come back!

I can’t comment on Teamwork, but I think you’ve made a good decision. I don’t see that there’s any serious prospect of a multi-user implementation in the foreseeable future. The Omni team are hard at work on OF3, which is single -user and I suspect (no inside knowledge) that multi-user would require some major redesign.

There’s a massive gap between the likes of OF, 2Do, Things and the likes of Omniplan, Merlin and so on. If you’re OK with two products, then OF and Trello or Asana or something are decent, but if you want to integrate your team-supplied work with your own work, it’s a problem