Why does a single action project not show up in the forecast view?

I have just realised that I’ve missed deadlines on a couple of items that I defined as single-action projects, because their defer and/or due dates did not appear in the forecast view.

It appears that if I add a “child” action within the single-action project, that action will appear in the forecast - but I don’t understand why I should have to do that.

Does “single-action” project not mean what it appears to mean? (I expect the name to mean that it is a self-contained object and doesn’t need any “child” actions)

Can anyone give me a pointer on how I can make a single-action project’s dates show up in the forecast view?

Forecast shows Tasks not Projects. A single action PROJECT is a Project. When it is empty, it has no Tasks. In that case, nothing shows up in Forecast.

OK - I think I understand. A single-action project can only contain ONE action. I had assumed that it was itself the single action.

Perhaps I’m not using the system in the “correct” way. I have a “household” folder into which I put various maintenance and repair tasks, many of which are projects with multiple actions. But many are just single actions - and apparently I can’t put an action directly into a folder.

Maybe I need to make my household older into a project . . .

Create a single action list (SAL) that will hold all of your single one-off tasks. I have one SAL in each folder.

There is a Work Single Action SAL. There is also a House SIngle Actions SAL.

This happened to me in the past. It was because my single action project was defined as the sequential. An item would hide others below it. Changing to parallel “fixes” that.

You can change the type of the project to “Single Actions” in the inspector: 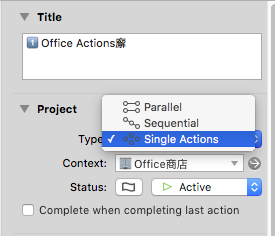 This will also allow all tasks in this project to become available (unless you change the defer date).

A potentially better solution for you, that I use is to create those SAP, as tasks under one enclosing SAP. So, for example, I might have one call Agenda, and then create my “tasks” under it that are “Call Sallie about Secret Project”, “Email Fred about meeting Friday”, etc. Or, a SAP “Shopping List”, with tasks, “Buy eggs”, “Buy Milk”. Hope that helps.