Yet another parallel project vs single action project question :)

Many of my projects are not things that will ever be compete, per se, such as “Practice Guitar,” but if nothing is available, I still don’t want to see the project name in the perspective. Can someone provide some guidance/wisdom? Thanks!

I don’t think I understand what you want to do. I think you don’t want the project name to show. Are you using a Single Action project for basically repeating/never ending tasks?

This might be a question of how to build a custom perspective of things for those with OF Pro.

I adopted a convention of placing the name of single action lists in square brackets, e.g. [Practice Guitar].

Using this naming convention, here’s a variation to the custom perspective I shared previously. 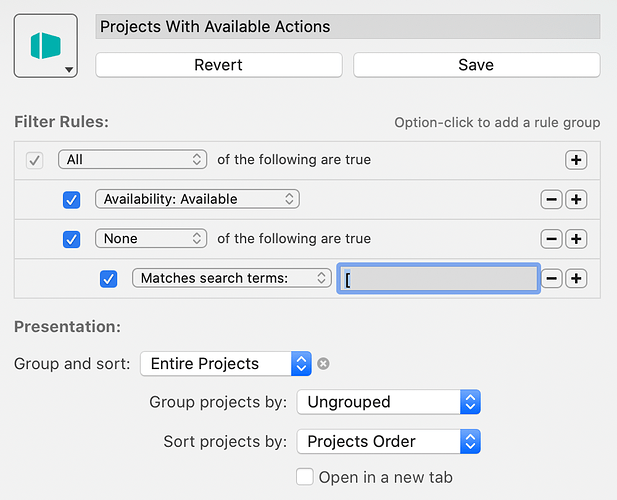 It’s not perfect. For example, if a title or note field happened to contain a “[” character it would be excluded. But, I still find it works well overall in my experience.

On a side note, I shared some other custom perspectives that make use of this naming convention in the Custom Perspectives for OmniFocus 3 directory.

I hope this helps!

For a parallel or sequential project, the project itself is considered the final action which needs marking as complete (ie. the project has a specific goal). So if the project contains no more remaining actions, the project name is implicitly the last available action and will show up in perspectives of type ‘Individual Actions’.

Project of type Single Action List don’t work like this because they are open-ended containers for unrelated (‘single’) actions. Those won’t show up in ‘Individual Actions’ perspectives when they have no more remaining actions.

I’m surprised that both parallel/sequential and SAL projects show up for me in an ‘Entire Projects’ perspective which filters on available tasks. I would have thought that they would behave the same as described above. @timstringer do you have insight on this?

(edit:) ‘Entire Projects’ perspectives behave like the Project perspective in this regard: a SAL with no remaining actions is shown in the project hierarchy when the view option is ‘Available’. This has some logic to it. On the other hand, custom perspectives filter actions based on a set of criteria and only then get grouped and sorted, so there are two ways of looking at it.

I’m surprised that both parallel/sequential and SAL projects show up for me in an ‘Entire Projects’ perspective which filters on available tasks. I would have thought that they would behave the same as described above. @timstringer do you have insight on this?

To clarify, does your “Entire Projects” perspective filter on Availability:Available with Group and sort set to Entire Projects, or are there other elements?

The two screenshots shows the perspective I’m working on. Regardless of whether “Photography” is sequential OR parallel, it shows the “no matching items.” Perpsecitve is set to only show “available”

To clarify, does your “Entire Projects” perspective filter on Availability:Available with Group and sort set to Entire Projects , or are there other elements?

Yes. The empty SAL shows up there. When the perspective is switched to ‘Individual Actions’ the SAL doesn’t appear (since there is no action corresponding to the root of the project of that type).

@eroxx for perspectives that group by ‘Entire Project’ your project will appear regardless of its type; all three of us are observing that behaviour. You’ll see it also in the Projects perspective set to show ‘Available’ items.

Would it work to set Group and sort: Individual Actions and Group actions by: Project?

You wouldn’t see your project hierarchy in the sidebar (tags would be shown instead), but the outline view would only show projects and single action lists that have at least one action that matches your criteria (Available with a “Next” tag in your case).

So does this mean there is no way to sort by projects and NOT see the project name along with “no items remaining?” I don’t understand the logic behind that … .?

And I’m still confused (shocking, ha) on when to use parallel first single action projects … Many of my projects are “non-ending,” is that more suited for a single action list?

It seems this is the behaviour of perspectives grouped by ‘Entire Projects’. As I said previously, I think it’s correct for parallel/sequential projects, but in the case of SAL projects it’s not what I would expect either and is inconsistent with the results of ‘Individual Actions’ perspectives.

The only difference between a SAL project and a parallel project is the behaviour with the ‘First Available’ filter, as @timstringer explained above. It’s the GTD concept of ’only show me the next action needed to move the project forward’. My rule of thumb: if the project has either some kind of goal/outcome or a useful order to perform the actions, make it a parallel or sequential project; if it’s a ‘bucket’ project that contains completely independent actions, make it a SAL. In your example, I would think about making ‘Practice Guitar’ or ‘Video Editing’ parallel projects.