Trying to make an electrical diagram with wiring depicted as many orthogonal lines connecting many pins on many different connectors. The desired look is to have lines running parallel to one another and maintain consistent spacing relative to each other as they turn. Example of the desired look is shown in the first image below.

The first image was created by manually manipulating the lines for spacing. This would be a lot of work on a diagram with hundreds of wires, especially because the effort would need to be updated any time a “connector” was repositioned on the diagram. I am used to this functionality as default in Visio, but cannot figure out how to accomplish this automatically in OG. The behavior I am seeing in OG is that as the “connectors” are moved around, lines begin to simply stack on top of one another as shown in the bottom three images. 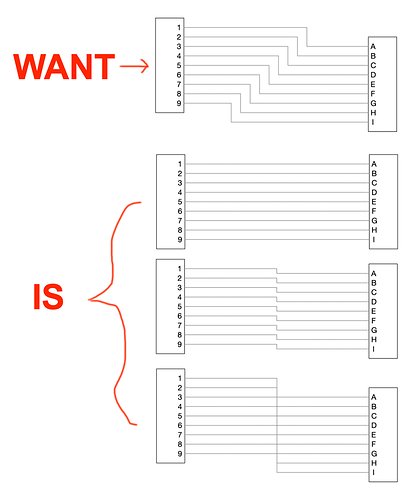 Does anyone know how to achieve the desired look automatically?

Welcome to the OG forums.

Does anyone know how to achieve the desired look automatically?

The short answer is no.

I have hundreds of diagrams that have that sort of need, a few explicitly electrical or wiring or cable, and many more eg. pure logic diagrams, where the lines must match and move as you have described.

Grid
Make sure that you use a Grid, and SnapToGrid, which is an absolute requirement to make any diagram look good. I base mine on the paper size, and then:

Visio
I am not a Visio expert, but I do have ongoing experience, in that I often have to export my OG diagrams onto a customer’s Windoze system, and then tweak it to fix the issues that do not get translated perfectly. I have not seen that sort of automatic spacing in Visio, Further, while that looks and works fine on a simple example, it does not work at all where the diagram is large, or where it has many wire-to-connector components. Point being, Midpoints on the lines are demanded.

OmniGraffle Enhancement Request
Worth having.

That a series of parallel lines that are:

Thanks for the reply, helpful - although I do wish the behavior you describe in that enhancement request already existed.