I haven’t yet pinpointed the cause of this, but I didn’t start experiencing it until upgrading to 6.5.
It seems that randomly, for all open documents, the inspectors all become disabled and I can’t make any edits to objects in the document using those tools. I can still drag items around the canvas and use context menus.

The fix seems to be quitting and reopening. Anyone else experiencing this issue?

Yes! We’ve seen this issue too but haven’t yet been able to pin down how to reproduce it reliably. Were you actively using OmniGraffle when this happened or was OmniGraffle open in the background? Had your computer gone to sleep recently?

I have seen this as well after upgrading to 6.5. I suspend/resume my computer quite a bit; I’m pretty sure that every time it has happened my Mac had been asleep, but not the inverse. I spent some time looking but also could not find any way to re-enable the inspectors short of quit/relaunch. It happens often enough to be a significant irritant. Hope your bug termination squad can hunt this one down soon.

Yes. Same problem. Quitting and restarting OmniGraffle (pro) fixes the problem. But then it recurs, typically after some hours of inactivity while OG is open in one of my Mac Mission Control Desktops.
OmniGraffle 6.5 (v169.5 r253125)
OS X 10.10.5

We think we have this fixed in OmniGraffle 6.5.1. If you bought directly from Omni you should see the update now. If you bought from the Mac App Store, we’ve submitted 6.5.1 for review so hopefully you see that update soon. You can also download a 2 week trial version from our site to use while you wait.

Please let us know if you continue to see the issue with inspectors becoming disabled overnight.

How incredibly frustrating for a new user.

It happened today when opening a new Omnigraffle document. The Omnigraffle application itself was already opened, while my MacBook was in and out of sleep mode.

Killing and restarting the whole application did help to enable the Inspector again.

Sorry to hear it! We’re definitely still working on it, but it’s proving quite elusive.

A few questions, if you wouldn’t mind:

The next time it happens, you may be able to recover without restarting; please try selecting OmniGraffle > Check for Updates…, or changing Workspaces (under the Inspectors menu). Do either of those unlock the inspectors?

Ok, I’m very confident we were able to track this bug down on Friday and our Test team is taking a close look now. If you would like to try a beta version of 6.5.2 that includes our possible fix, you can download a copy here: http://omnistaging.omnigroup.com/omnigraffle/

We would love to hear if it helps or doesn’t, just reply to this thread or send us an email (omnigraffle@omnigroup.com).

I have seen this as well after upgrading to 6.5. I suspend/resume my computer quite a bit; I’m pretty sure that every time it has happened my Mac had been asleep, but not the inverse. I spent some time looking but also could not find any way to re-enable the inspectors short of quit/relaunch. It happens often enough to be a significant irritant. Hope your bug termination squad can hunt this one down soon. 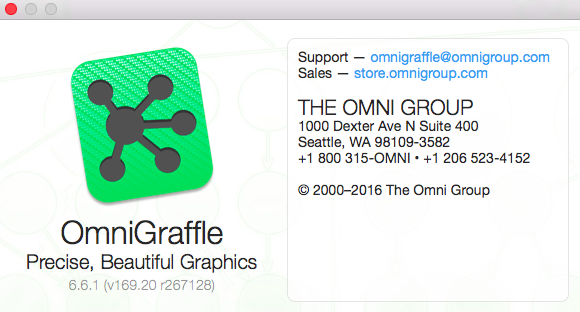 This bug has been around for ages. I first saw it in 6.1.

It was still there in 6.3, and it was one of the several bugs that prevented me from using OG 6.

I do not accept that it is “elusive” or “hard to find”. It is evdiently, irrefutably, the result of the absence of standards in the app. Possibly not following the Apple standards for context switching within the app.

Separately, the result (all Inspectors disabled) is unacceptable. It means the asynch routines that are activated when you switch in/out of Context, are broken. They are unaware of what has come into Focus.

There are similar annoying bugs (other than all Inspectors being voided) that occur when switching Context, which is why I make the statements re OG developers having an immature understanding of Context:

Eg. it is ridiculous, but very telling, indicative, that when you switch from another app to OG 6, the Apple ColourPicker (if you have selected that as the ColourPicker) is brought into the foreground, and placed in focus.

I did find a work-around, however. Changing to another canvas and back seems to make the inspectors work again.

I tried the ‘switching to another Canvas’ hack and it only enabled the inspector for my first Canvas.

It seems like there must be two selection models that can get out of sync. After this happens I can switch to a different canvas, select something, get the inspector for that thing, and then switch back to the canvas where I had no inspector, select an object on that canvas, but secretly still be editing the previously selected canvas’ objects. Even though there are clear selection handles on the canvas I’m on, the inspector is still inspecting that other set of objects on the other canvas.