I have two contexts, Waiting and Agenda. Under those, I have sub-contexts for individuals. I apply those specific contexts to the person I need to speak with or for whom I’m waiting on something. In the morning, as I’m starting my work day, I do a quick review of my Waiting and Agenda contexts (I have perspectives to show these on my dashboard) that breaks down what I’m waiting to talk to someone about (e.g., Agenda --> Mary) or to check on a task I’ve delegated (Waiting --> Robert). The perspectives look at all of the Waiting or Agenda items, so they’re nicely grouped by person on the screen, letting me see them all at once.

Sometimes, if I have a meeting schedule with someone, I’ll add an item from this list to the calendar invitation for discussion later in the day. More often than not, I just glance at my Agenda and Waiting context specific to that person before I see them or once they come into my office if it’s not a scheduled meeting. This lets me know within a couple of seconds anything I need to discuss with them or get a status update about, in addition to whatever they stopped by to discuss with me.

If it’s someone I don’t usually delegate to, I just stick it in the generic Waiting context… which, again, I check each morning to see if anything is ripe for picking.

@jdavidcarr, do you mind sharing the setup of the perspective you use to do the please as it is a problem I’ve been wrestling with.

Thank you for your help.

@iwaddo I don’t mind at all. For the Waiting perspective, select the parent context (Waiting). Then don’t use project hierarchy. Group by context, sort by project. Filter by any status, remaining, any duration, and on hold.

For the Agenda perspective, select the parent context (Agenda), and then same settings except for the last filter (Filter contexts) it’s “Any Contexts”.

do you mind sharing the setup of the perspective you use

Here are screen shots of the perspectives. Keep in mind that what you can’t see, is that you have to select the parent context (e.g., Agenda, Waiting) in the context view also. 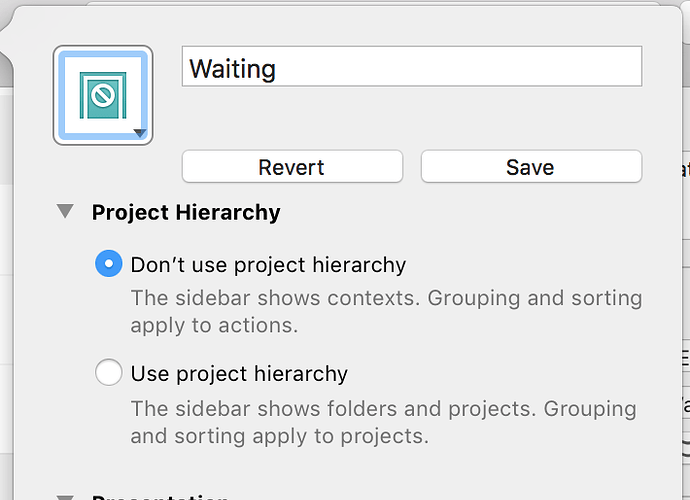 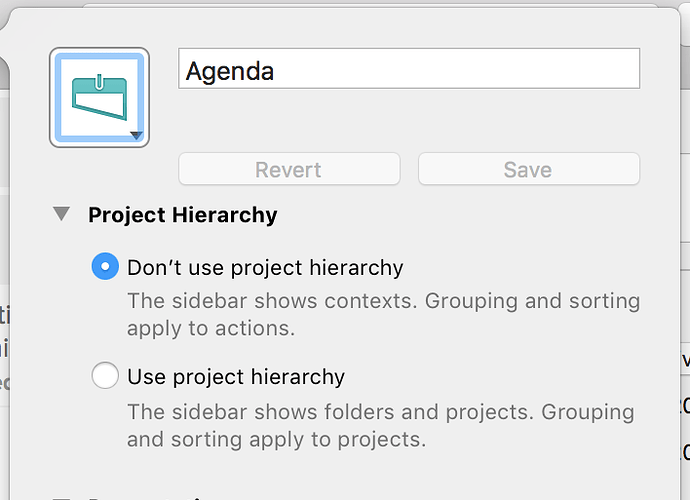 @jdavidcarr Thank you this is helpful. I have looked at this type of approach previously and found that having to look at two different perspectives to be cumbersome. Having a view by person showing what I need to talk to them about (Agenda) and they owe me a response on (Waiting) is what I’m really after which I guess is where tabs come in.

Having a view by person showing what I need to talk to them about (Agenda) and they owe me a response on (Waiting) is what I’m really after which I guess is where tabs come in.

Glad it helped. Keep in mind that you could, in theory, use either Agenda or Waiting to capture both things you’re waiting to talk to them about or things you’ve delegated to them. This would give you a single view with everything in one place, broken down by individual.

Thank you for sharing this! I have approached this slightly differently, though.

I did not like having to look at multiple perspectives, so I created a unified perspective for all agenda and waiting items.

The only weakness of the unified set up, is that I have to look at two separate sections of the perspective when I am meeting with someone. It is a minor inconvenience, but I would love if there were a way to group the people together so that I can see agenda and waiting items per person in the same place.

With certain people that I interact with quite a bit, I have perspectives just for them so that I can see the agenda and waiting items together. My wife, my legal secretary, and my “trial team meetings” context. But I only have these three otherwise it becomes unwieldy (and not very useful).

I did not like having to look at multiple perspectives, so I created a unified perspective for all agenda and waiting items.

My approach works for me largely because I check Waiting tasks first thing in the morning, following up with individuals at that time (even if just sending a quick email telling them to be prepared to give a status update in a scheduled meeting later in the day. By contract, I look at my Agenda perspective any time I run into someone and want to check if there are things I need to talk with them about.

If you aren’t using this approach, I can see how checking two different perspectives whenever you bump into people would be a nuisance. Not sure it’s significant of one to make me merge the two perspectives though. I like having those things separate. I also have Agenda subcontexts for things life Staff Meeting and Monthly Status Call.

@jdavidcarr - I hope you did not read my post as a criticism of your approach. If that’s how it came off, I’m terribly sorry. I just meant to offer an alternative that works with my workflow. You have a well thought out system; I was just trying to “riff” off you and share my own solution to this workflow problem. Thanks for sharing your solution. These are my favorite posts to read on this forum—seeing how other people manage their workflows. -Tom

I hope you did not read my post as a criticism of your approach.

No, not at all. I was merely pointing out how my particular use case doesn’t present this as an issue for me (e.g., I only care about the Waiting tasks typically once a day, not ad hoc throughout the day). I’m never so arrogant as to think that my ideas can’t be improved upon; most of what I do is actually an evolution of what someone else was doing and was kind enough to share in a forum such as this one. I didn’t take your response that way at all, but thanks for taking time to make sure of it.

Curious; how do you avoid having a bunch of duplicated entries? Just off the top of my head—not having tried to implement it yet, mind you!—it seems like for every person with whom one interacts, there will be at least two entries. One under Agenda, and then a second one under Waiting.

Maybe this is not much of a problem, or is something that is easily resolvable, but I am really just curious in either case. This idea is fascinating (as is ipersuade’s take), and I am just wrapping my brain around it.

I have a duplicate set of sub-contexts in my agenda and waiting contexts. The sub-contexts under waiting all have a suffix of “(w).” That way I can visually discern the two contexts. The system works very well and is easy to maintain. I do not know that it is the most elegant solution in the universe—having to have a duplicate set of sub-contexts—but the only tedious part was setting it up initially. In practice, using it is very simple and does not take a whole lot of thinking time. Also, one good side effect is that it is easy to convert a task that I plan to delegate to someone to a task that I am waiting on after it has been delegated just by changing the context. That has been helpful to me.

Curious; how do you avoid having a bunch of duplicated entries?

I didn’t implement it this way. I have a Waiting context and sub-contexts by person, so when I look at my Waiting perspective, it’s grouped by person. I do this in the morning when I get into the office and plan what to follow up on throughout the day.

I have a similar approach for Agenda (context) and individuals (sub-contexts) so that if someone walks into my office unscheduled, I can readily see what I wanted to chat with them about. I may also look at the Waiting perspective, but chances are, I already know what’s delegated to them from my pre-day review earlier.