Are plans in place to make adjustments to the OmniFocus for iPhone to take advantage of the larger iPhone 6+? Would be nice to have more of the iPad functionality available in the iPhone app. I really do love the application!

If you want this to be considered, you have to email it to Omni ;-)
This is the only official way for support & feature requests.

Agreed - it’s rather ugly on the new iPhone 6+ as it stands. Even font optimisation will help, so we get to use the extra real estate. Will send email in.

Are plans in place to make adjustments to the OmniFocus for iPhone to take advantage of the larger iPhone 6+? Would be nice to have more of the iPad functionality available in the iPhone app. I really do love the application!

We received our first iPhone 6+ devices today, and we’re definitely looking forward to seeing how we might update our apps to take advantage of this new form factor. But we have a number of challenges to sort out along the way, both technical (adapting our app interface logic to support the new size) and business (figuring out how this affects our OmniFocus product lineup, which currently has independent iPhone and iPad apps with a lower cost of entry on iPhone and a richer set of functionality on iPad).

But if this is something you’re interested in, please do let us know! The best way to do this is to send email to omnifocus@omnigroup.com.

It’s gonna need to be updated for the 6 screen too! The app definitely feels like it’s designed for a smaller screen blown up to work on the bigger size. There’s just so much unused space right now and I’d even say that having a review mode is going to make sense on these devices! I’m hoping we’ll get an update for the new screen sizes sooner rather than later, i hope!

Emailed this FR request too. If done right, the iPhone 6 Plus could de-throne the iPad Mini as the best mobile OF form factor.

Do you think it would be possible for the dev team to port the iPad version to the 5.5 inch form factor? I personally wouldn’t mind a smaller font.

It’s gonna need to be updated for the 6 screen too! The app definitely feels like it’s designed for a smaller screen blown up to work on the bigger size. There’s just so much unused space right now and I’d even say that having a review mode is going to make sense on these devices! I’m hoping we’ll get an update for the new screen sizes sooner rather than later, i hope!

I thought exactly the same. The iPhone 6+ 5.5" screen is really awesome and just perfect to port the iPad version on it.

So basically it’s “just” 500 pixel which we have to squeeze together :p
To be honest, Entries aren’t that long, because actions have to be clear and easy to understand, everything else and explanations belongs to the notes section of an action. My suggestion would be to port the iPad version and just shrink the width. Of course the font sizes have to be changed a little bit and some other stuff but that shouldn’t be the problem. Furthermore people who bought the iPad version of OmniFocus 2 should get an free update ;)

The iPhone 6+ optimised version will probably be updated to work differently in landscape (wide) mode. 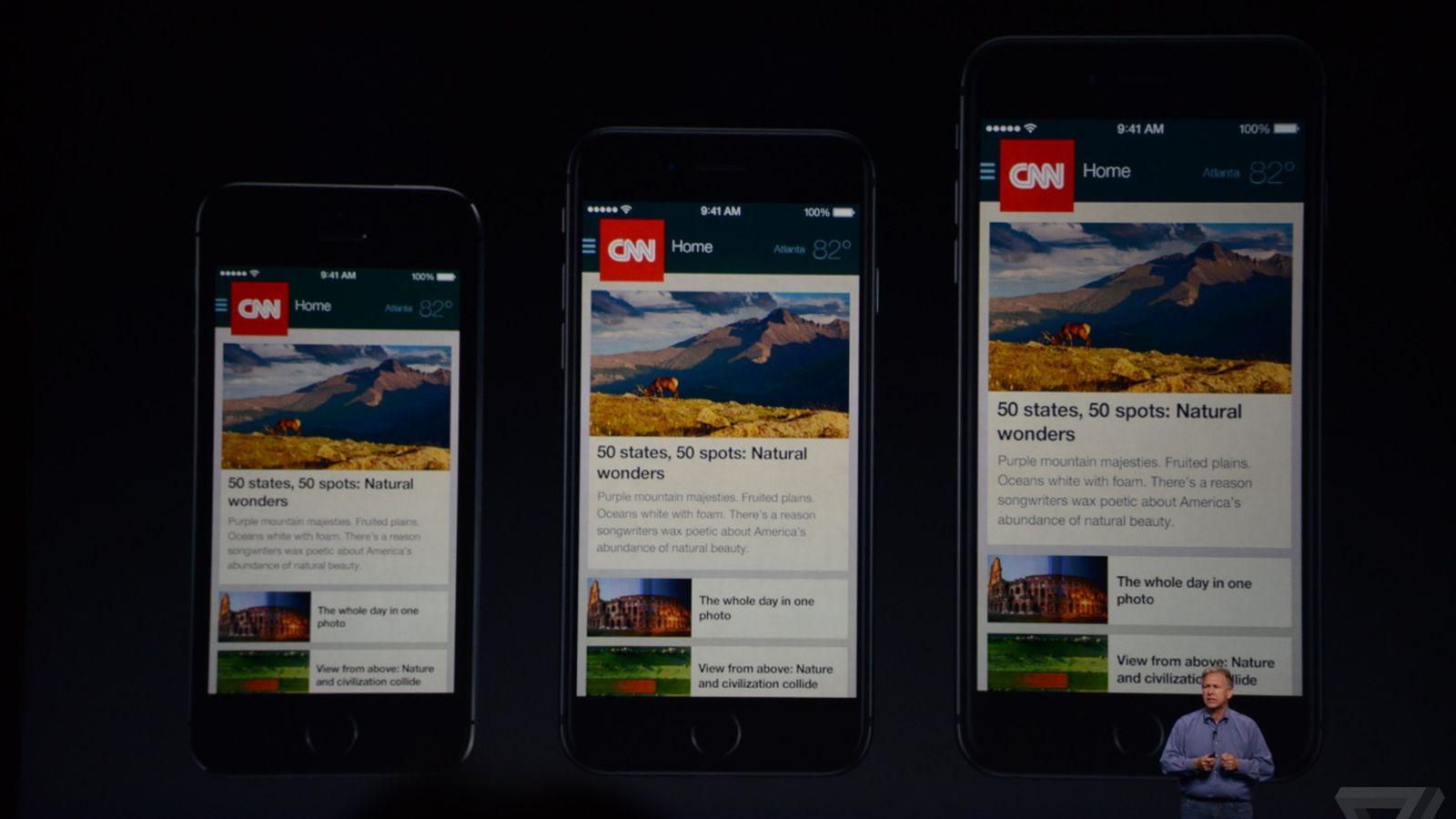 Whenever Apple launches a new gadget with a new screen size, iOS' current apps have to be made to fit them. Sometimes, the resolution of an app only needs to be doubled, as was the case with the...

Additionally, given the size of the new iPhone screens, a new tweak in iOS will allow certain apps to run in an iPad-like landscape mode on the 5.5-inch iPhone 6 Plus. This mode, which is activated by turning the new device sideways, may show a new left-side column like on iPad if developers implement it. Other new software features for the largest iPhone include nice details like a pop-out email message (pictured above), a new 2-pane Stocks view (pictured below), and small touches like added photo avatars in the Messages app. In total, apps for the iPhone 6 Plus look a lot more like their iPad and iPad mini counterparts.

Otherwise, the app will probably be the same when it is in portrait (tall) mode.

You must still have good eyes. I don’t know if my eyes will be able to handle smaller fonts even if it is on an iPhone 6+. •••sigh••• Gonna have to R&D Lasiks eye surgery if I’m gonna see OF2 for iPad on an iPhone 6+.

I must say that you have a point. Looking at my iPad Mini, the font size is perfect. Don’t know how much of a “squeeze” a port to 5.5 inches would entail. That might be too hard on the eyes with such a smaller font.

“But if this is something you’re interested in, please do let us know!”

Given Omni Group’s reputation for quality software, and in light of the price of these products, I would think that updating Omni Focus 2 for iPhone so that it is optimized for the devices it is designed for would be a top priority, whether it is requested or no. Frankly, the experience on the new iPhone 6 Plus is not good.

I’m going to guess that at least 90% of the app developers are still trying to optimise their apps for the 6 and 6 plus screens. Priorities will be different for everyone. Some of us are hoping for more development on OF2 for Mac. Others are hoping for OF2 for iPhone 6 and 6 Plus.

Ken Case was on the Mac Power Users podcast as part of a roundtable of developers discussing iOS 8 development. Ken was talking on the podcast along with the developers from 1Password and TextExpander.

At the 57:20 minute mark, Ken talks about an issue about iPhone 6 Plus development.

David and Katie are joined by some premiere developers to developers including Dave Teare of 1Password, Ken Case of OmniGroup and Greg Scown of Smile. We discuss the processes of developing for iOS 8, new iPhones and more.

I guess the main point was that developers have to figure out what to scale up or down when you’re dealing with the 4", 4.7", and 5.5" screen sizes. Developers will probably experiment with something that can scale easily between the three different sizes. It’s still a work in progress…

You can download the podcast or click on the link at the bottom of the page where it says “Play in new window”. This should stream the podcast. Fastforward to 57:20.

You can download the podcast or click on the link at the bottom of the page where it says “Play in new window”. This should stream the podcast. Fastforward to 57:20.

In case it helps, this link will load up a web player and jump to the appropriate spot in the episode. (Well, a few seconds earlier, so you can hear the question that @kcase was responding to.)

It’s now almost 2 weeks since the launch of the iPhone 6+. For those of you who own one, has there been a fix released for the resolution yet?

Give it time. iOS 8 just came out and a lot of developers are still scrambling to optimise their apps for the iPhone 6 Plus. Omnigroup isn’t the only developer who are trying to balance the different screen resolutions of the iPhone.

Although I’d obviously like to see more functionality added to the iPhone app at no additional cost (who wouldn’t? :) ), realistically I can understand that there really is a disparity and that implementing some of the iPad functionality on the iPhone side makes that a tricky balance.

Personally, I wouldn’t at all mind paying a “Pro” IAP upgrade fee, similar to what’s now been done in the iPad app, in order to enable the additional functionality. Arguably, if the OF for iPhone 6+ enhancements could replicate what’s on the iPad, I’d definitely have less need for the iPad version – which although I’ve repeatedly bought and upgraded, I never end up using as much as I think I will, simply because the iPad is in a distant third place among the devices I most regularly use.

Another way to handle it might be to do an IAP for an iPhone 6+ “Pro” upgrade, but also find a way to give that update for free to those who have purchased the iPad version. Probably trickier due to the way the App Store works (can’t install the iPad version on the iPhone 6+, so I’m not sure how you’d validate the upgrade), but that does seem like it would be the fairest way to do this if you were going to go to an add-on model for the iPhone version.

Status update on OmniFocus 2 for iPhone 6 and 6+:

For the OmniFocus 2.4 for iPhone update, we identified 120 issues to fix. As of this morning, 96 of those fixes were complete, while 16 were still being tested. That said, we’re still finding new things as we test the app—so even though there were only 8 approved items remaining there were another 15 items waiting for triage.

Wanted to add my vote for iPhone 6+ support (I’ve also sent an email to support@omnigroup.com). I would much prefer a simple recompile to take advantage of the extra real estate of the iPhone 6 and 6+ rather than an entire interface redesign (i.e., closer to iPad). I honestly haven’t found that I’m using the new landscape views in Mail or Calendar very much, so don’t put much time into it. Or, if you decide to reinvent the interface down the road, please add a quick update to take advantage of the added space in the interim. I did this for my apps - all it took was adding the Default (splash screen) images for iPhone 6 and recompiling (because I did not hard-code any absolute sizes into my app UI). Worked great.