How to keep everything in sync

I have an increasingly hard time keeping all my instances of OmniFocus in sync. I use it on two computers, a phone and a tablet, which isn’t much in my opinion.

My internet isn’t slow either. Ping to sync.omnigroup.com is 150 ms and I get 50Mbps symmetrical.

Is there a way to see the sync status in main interface or is there a shortcut to get to the settings?

I have never had issues with syncing in the past but have to agree - it seems much more laggy now than it has been in the past.

I run it on 2 Macs, iPhone, iPad and Watch and frequently have to force a refresh as I can see it is out of date when I switch platforms. I initially put it down to a temperamental VPN on one of the Macs but maybe it’s not that if others are experiencing the same?

I’m seeing this too. I’m only using it in 2 places, my Mac and my iPhone. I did some processing yesterday on my Mac while it didn’t have an internet connection, and despite both devices claiming to have synced since then everything’s still in my inbox on my phone.

The phone’s sync log has a bunch of deferred syncs, but also a bunch that look like they completed normally: 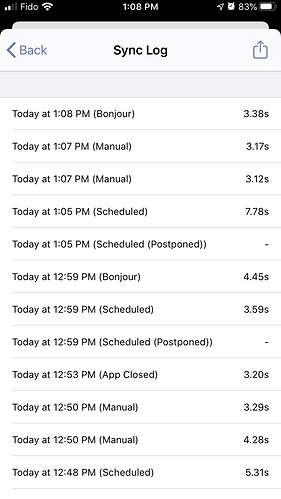 Any idea how to get these devices back in sync?

Exactly the same for me this morning. I had a full day of changes that were not being reflected on my iPad despite the synclog showing syncs being completed (with a number of them postponed too)…

@johnbeales … are you on IOS 14 beta by any chance? I am wondering if this is the issue as i am on iPadOS public beta.

I had to force a sync by updating a Task on my iPad… it then forced a sync.

I see 13.6 is available, so I may update, but I doubt it would make that much difference.

Same here. No syncing thru OmnySync, unless I force it and it does not always work, between iMac-iPhone and iPad all running OF3

I raised it with Omni support humans who said (understandably) that because I am on iPadOS 14 beta they can’t really help much at this time. They did say that they had seen some issues which appear to be related to external iPad keyboards … which I also have … but seems a weird thing to impact on sync!

If you are not on beta and having same issues then maybe you can raise a call and reference my call (#2398062) as an example of others having the same issue ?

I am on 13.6 on iPhone and Mojave’s on Mac and am experiencing the lack of sync more and more each day right now.

Same iOS (13.6) on both iPad and iPhone. The only difference is I’m not using an external keyboard with the iPad and I’m on Catalina on Mac.
I’ll support your issue with Omni.

They did say that they had seen some issues which appear to be related to external iPad keyboards … which I also have … but seems a weird thing to impact on sync!

Pure speculation on my part: but perhaps it’s to do with OF not knowing if a selected item is currently being edited - which might block sync. The on-screen keyboard being up or not is clear sign of that, but with an external keyboard that information is gone or might be presented differently by the OS.