Hello,
I am building out a large client Org Chart, and I’m finding that Omnigraffle is getting in the way of the task rather than helping. I’d planned to set it up with Auto-Layout so that as I add branches as I explore the account, I wouldn’t have to manually rearrange boxes.

The AutoLayout is making really odd routing decisions. I have set up the boxes to have four magnets, one on each side. 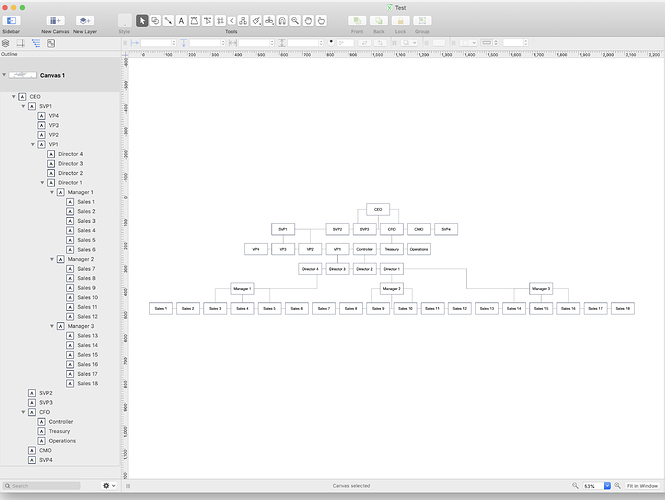 In the example file attached, it appears as if Manager 1 reports to Director 4, VP1-4, Controller, Treasury and Operations all seem to be connected to each other and jointly reporting to SVP1 and the CFO. Director 2 appears to report to the Controller.

I can of course turn off auto layout and manually arrange the lines, but this makes it somewhat less powerful than Powerpoint!

I see lots of requests on the AutoLayout on this board, perhaps we need a more in-depth explanation of the logic and how we can use the full power of Omnigraffle to make the job easier, not harder.

Yes, it is very strange. And the more recent version are stranger still. OG V4 laid out Hierarchies in both styles (more, later) perfectly. Given a Template doc and objects that were set out properly, for the purpose.

The strange behaviour started with OG V5, wherein one must fiddle manually, and it does not seem to respect the Template.

OG V6 and V7 are stranger still, and I have not tried very hard to figure out how to make it work. They can’t explain how Auto-Layout works, therefore there is no point is trying to tame it.

There are two styles for laying out an hierarchy.

This is what you have. It is the most common, immediately recognised and understood. But it is very limited, and anything more than a small Org Chart takes up masses of space horizontally. So you end up butchering the top-down tree to make it fit, and thus it becomes hard to understand. Dotted lines and lines where lines should not be. Horrible.

Think FileMangler; Finder in Column mode; the table of contents of any good reference volume, with the sections indented. It is everywhere, just as easily understood, but not frequently used when one draws a diagram. It is the same tree rendered left-to-right. It minimises horizontal space, especially for text, wherein the words run left-to-right.

Much easier to draw, and redraw, and maintain, in OG.

Here is an example of an article, the structure of which is identified in the ToC. Same as a corporation.

First, forget about the nifty rectangles that do not work. Figure out an object that is relevant to the task, and create it correctly. Eg a title and a short descriptor.

In this one, I have an object with two sections, one Magnet on the left side, centred. 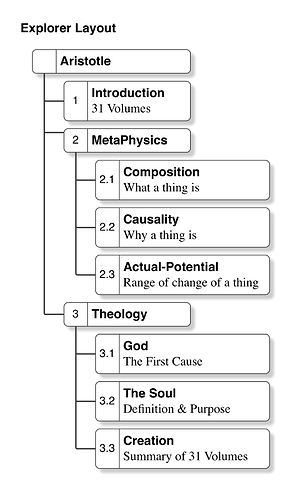 You can draw a hybrid chart, with (eg) the major corporate division in OrgChart style at the top, and then Explorer style trees “hanging” from each division. I see that you have two styles on the one diagram in the example in your second post. But that uses the same rectangle that does not work. Try a pure Explorer style first, learn from that, and then, only if you have to, execute a hybrid. And then be consistent in the hybrid: use an OrgChart object for that section; and an Explorer object for that section. Do not mix them up: the whole diagram will look ugly as sin.

I have set up the boxes to have four magnets, one on each side.

Lines drawn between shapes will try to route to the nearest edge. In this case, where you have a broad structure, the nearest edge will often be on the left or right edge—which leads to some strange looking routing (as in your screenshot).

What you really want here is to have your lines always connect to the top or bottom of each shape. Select all your shapes (use the selection sidebar to do this with one click), and change their magnets from N, S, E, W to simply be N, S. 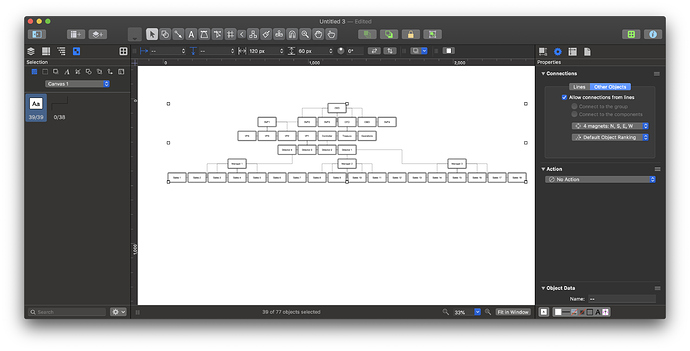 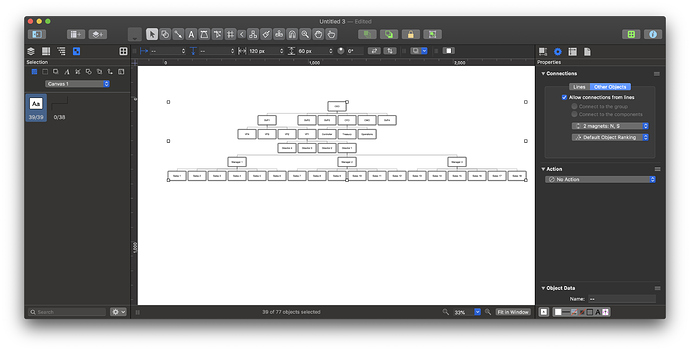 OG V6 and V7 are stranger still, and I have not tried very hard to figure out how to make it work. They can’t explain how Auto-Layout works, therefore there is no point is trying to tame it.

OmniGraffle 7’s built-in help describes its various layout algorithms in Automatically Arranging and Styling Objects with the Diagram Layout and Style Inspector (also available on our website, linked here), but please don’t hesitate to ask if you have further questions!

OmniGraffle 7’s built-in help describes its various layout algorithms in Automatically Arranging and Styling Objects with the Diagram Layout and Style Inspector (also available on our website, linked here), but please don’t hesitate to ask if you have further questions!

Thanks for that, Ken. It appears OG 7 now respects the Style Doc.

Re what was lost in OG 6, does OG 7 execute an hierarchical layout left-to-right, as illustrated in my previous post ? Given a correct Style Doc.

FWIW, since there are two well-know layouts for hierarchies, I would suggest the following labels:

Ken, I’m in awe of the CEO who not only takes time to answer a customer question, but also takes the time to recreate my sample org chart to show me a better way. Very impressed!

I did stumble on the the N/S Magnets option, and it does help a lot, but I’m still playing whack-a-mole with locking & unlocking elements, manual alignment and distribution to try and tame Auto Lay. Understanding magnets and so on definitely helps, but it’s still not the tool I need it to be.

In some Mind Mapping Software, you can change the behaviour of branches from certain descendants, going from hierarchical vertical to horizontal for example. That would certainly help with mapping a 300 person organisation with only 4 management layers!

Understanding why groups behave massively differently to a single shape might help me find a smoother path too.

Ken, thanks again for your interest and effort. Much appreciated.

Re what was lost in OG 6, does OG 7 execute an hierarchical layout left-to-right, as illustrated in my previous post ? Given a correct Style Doc.

Certainly! When the Hierarchical option is selected in the Layout popup, there’s a segmented control right underneath where you can choose any of the four cardinal directions as the direction of layout. Here’s the option you would choose for laying out left-to-right:

(The iconography is fairly suggestive, but if you pause your mouse over that option you’ll also get a help tip indicating that it will lay out left to right.)

I do not understand why. It may be that I am missing something. So I thought I would try it. It takes a few minutes for typing the titles, and then 10 minutes, say 15 minutes total to layout the chart.

Same as you, I used Align & Distribute. At the end of that step, there was nothing left, to get Auto-Layout to do, so I didn’t end up using it. I was robbed of the opportunity to play whack-a-mole.

Ken has set the standard, so the least I can do is meet him there. The upload fails silently, so we will have to content ourselves with a link to the Large Org Chart.

So then I was really confused, then I really could not understand your problem. So I read your posts again, very slowly. I obtained some observations that you may find useful.

That coupled with trying to tame Auto-Layout to work with you while you keep changing the goalposts, would turn the 15 minute task into hours.

I would not use Groups or multiple layers for this one.

In some Mind Mapping Software, you can change the behaviour of branches from certain descendants, going from hierarchical vertical to horizontal for example. That would certainly help with mapping a 300 person organisation with only 4 management layers!

Agreed, that would definitely be a useful feature! One of our team suggested a few years ago that it would be great if subgraphs could have different diagram layout settings, which seems like it could be a good approach to addressing this need. I’ll add a note to that feature suggestion about how it would help your use case.

In the meantime, if you need to combine multiple layout parameters in a single diagram one option might be to turn off the auto layout setting and instead use the Diagram Layout > Lay Out Selection contextual menu item on your branches. (You can change the layout parameters, lay out a branch, then change them again and lay out a different selection.)

Once you’ve laid out a branch the way you want it, you can group all its items to freeze their layout and then lay out the entire graph.

Understanding why groups behave massively differently to a single shape might help me find a smoother path too.

The first difference is one I alluded to above: you can freeze the relative layout of a section of your graph by grouping its items. If you want the entire group to behave more like a shape, you can go to the Connections inspector and change the radio option to allow connections from lines to the group: 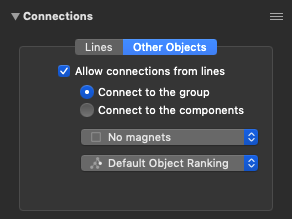 This will also let you place magnets anywhere on the group to customize where those connections should be anchored, much like you can do with individual shapes.

But I don’t know whether that covers the differences you had in mind. If not, an example of something you’re wondering about might help!

(There’s a whole other dimension to layout and diagram styles involving the options around collapsible subgraphs. But I’ll stay away from complicating the discussion with those unless someone is specifically wondering about them!)

Ken, apologies for dropping out on this, the rest of the workload caught up with me.
Thanks again for the detailed responses - it’s really appreciated and very helpful.

Sorry for dropping out on this after all your efforts to understand. I did manage to use the suggestions from you and Ken to get my chart ready for the big presentation and it’s now a constant work in progress as people change roles.

I really appreciate your input, thanks again.