As the title says. Here is an artboard created automatically around a circle with a stroke. 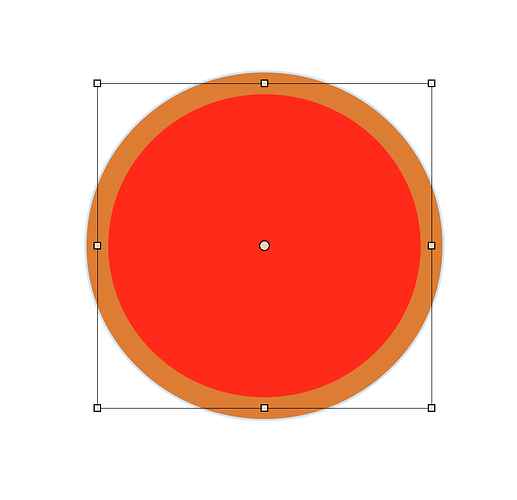 I think the edge is the stroke. That is a core element of each object. In your parlance, it is centred.

If you want a stroke that is not the edge (in your parlance, inside or outside), that is a new request.

Here is an artboard created automatically around a circle with a stroke.

The old feature does not have that bug that the “new feature” has.

This is an example of a general problem. The bounding box of an object goes through the center of its stroke, not the stroke’s outer edge. In this case, Make Artboard draws the artboard object to match the original object’s bounding box. Other effects of this issue:

This becomes evident with large stroke widths, as in the image above.

It may be that this is an Apple framework issue. Powerpoint, for example, shows the same effects.

As the title says. Here is an artboard created automatically around a circle with a stroke.

Thank you for reporting that! Our internal testers also caught that right away, and we plan to fix it before 7.0 goes final: we just wanted to get the interface into place quickly so our translators could translate it into other languages.

We added support for this in OmniGraffle 6.1. In the Stroke inspector, set the stroke type to “Inner Stroke” or “Outer Stroke”. (In the 6.1 blog post linked above, there’s a demonstration of these options about 45 seconds into the 1-minute video.)

Rather than worrying about stroke size, and inside/outside stroke, etc, you might want to add an automatic margin to the Export area, just like SelectedObjects does, defaulting to 0.2cm, but allowing any width…

Thanks, Ken! Sorry I missed the inner stroke feature – it takes care of my comment.

Is is possible to add a stroke to the artboard? I’m finding I need to create separate objects in the upper layers to define the borders of my wireframes for exported screens.