Markdown Support in Notes - Useful or Not?

Would (limited) markdown support (with a toggle for show text and show markdown) be useful in Notes?

What would be the advantages and/or disadvantages?

I personally would welcome the ability to use headings, bullet points and emphasis as well as horizontal rules. The downside would probably be that markdown code (rather than the result) would be visible in iOS devices.

Would you use Markdown in your notes?

(BTW I recognise that even if this is a good idea and OF decided to do it, it probably wouldn’t make the June release)

I would definitely use it. However, I also use the MailDrop feature so my notes field often has all kinds of rich text junk in it I don’t know how the interface would play out for managing both of those cases.

Agreed on the junk formatting in mail drop - I have stopped using it for that reason, too much pain/discordance. I either embed a link to the mail (ok on mac, useless if on iOS as it can’t get to the mail) or cut and paste the relevant bit from the mail (or both).

For OF2 Mac, OMNI have the HTML Rendering capability in OmniWeb so it might be feasible to accommodate HTML, Markdown and plain text in the notes.

I suspect it will depend on whether there is sufficient demand (and enough development resources). There would probably be a knock on effect into the iOS apps if full blown HTML was rendered - though it wouldn’t be much different to today with HTML going into maildrop.

Markdown is at least semi readable in plain text on the iOS devices.

The lack of Markdown support has long been a bugbear of mine with OmniGroup apps; in particular with regard to how they transition from desktop to IOS. I make use of a lot of visual notetaking but rather than weighing my notebooks/journals down with heavy image attachments I upload them to Droplr and use markdown to render them in Day One/Notesy/Editorial. I’ve longed to be able to do the same sort of thing with OmniOutliner and OmniFocus. Databases/files remain nice and lean yet notes/outlines have access to as much rich content as required on mobile devices.

This is obviously just one useage scenario for Markdown but it’s a pretty essential one for me.

I’d love to have Markdown support in OF. Should render HTML preview in view mode (like DayOne).

But Markdown would only make sense for me if it’s available in all three OF versions (Mac, iPhone, iPad). Otherwise it’s going to be a mess.

I personally wouldn’t. Easier to use +B for bold, +I for italics as opposed to using the Markdown syntax. Adds unnecessary complexity to the fairly simple process of writing notes.

The notes section isn’t meant to be for long-form writing.

@savantier. Agreed, Notes are not intended for long form writing, though they can and do take large emails on occasion (particularly via maildrop)

I keep some lists in the notes though, stuff that changes rarely, and it would be very helpful if there was a neater way of outlining than using * or - and spaces. I tried keeping ‘lists’ out of OF, but that meant I had another ‘repository’ to manage and didn’t stick.

Updating notes when I am chasing up a ‘Waiting for’ item would benefit from a Horizontal Rule to separate my notes from each ‘chase’.

I personally wouldn’t. Easier to use +B for bold, +I for italics as opposed to using the Markdown syntax. Adds unnecessary complexity to the fairly simple process of writing notes.

The notes section isn’t meant to be for long-form writing.

Most Markdown editors respond to Command-B and Command-I to do the right thing. And a lot of folks use Notes to compose emails. (And start blog posts, lists, etc. Now imagine hooking up an AppleScript to take your already-Markdown notes to a markdown email client like MailMate and you’re two steps away rather than five.)

Anyway, Markdown isn’t universal, so I’d hope it would be a preference.

Disclaimer: speaking as a user of OmniFocus, not an employee. :)

Absolute agreement here, as I’m one of those that uses the notes area to jot initial thoughts for blog posts and such like. I’m just one of those people that likes to keep as much of my data in plain text format as possible to aid portability, so Markdown is a huge boon here. But as I’ve stated before Markdown is also great for including rich content in your notes without the need to embed it - which is particularly useful for notes that are used across both OS X and IOS. As others have highlighted if Markdown support is included at some point it will make most sense if the IOS apps also include Markdown support.

I moved a post to a new topic: Microsoft OneNote integration?

@savantier: Markdown doesn’t add ‘unnecessary complexity’ if you just don’t use it.
Users with different workflows would benefit a lot from Markdown support.

Maybe a hybrid ‘styled text’ implementation is a compromise.

Markdown in notes would be useful but even more would be checkboxes in Notes!

If it is a checklist to be printed then it can be done at least on the mac (but is a pain, see below)

Out of interest How/Why would checkboxes be useful?

If they are for tasks that have to be completed then an action group (in omnifocus) might be better than a list.

That said, to put a check box in.

in the OF note (mac version) put the cursor where you want the checkbox, click on show character viewer from the menu bar, get the correct box from bullets/stars (you can save to favourites if you want). Double click and it inserts.

Presumably you could have a macro (keyboard maestro, alfred etc) that would do this for you. 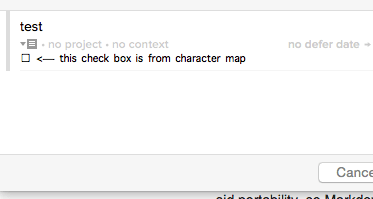 Checkboxes in notes eliminate complexity in projects. If a 20 minutes task has four 3 minutes steps, I prefer not to add four 3 minutes tasks which will increase my tasks due today (assuming the main tasks is due today) and increase the OF database size. The point of OF is not too have checklists but actions and projects right? Just consider a shopping list. It would be too much clutter to have grocery items as separate tasks. If I could check them off in the note of my “Go Grocery Shopping” task, then perfect. Maybe with Mac El Capitan I can link to notes in Mac Notes? (I will check tomorrow).

I think that formatting of notes would be great, akin to how Apple has done it in Notes.app would be neat. Selfishly, I love the idea of markdown formatting, but I don’t know how broad its appeal/utility would be, so I’d settle for any basic formatting approach. Certainly for those of us on these forums, it (markdown) would be a boon - we post in markdown all the time! ;)