Currently using the trial version for mac, is there any way to align the diagram in this manner? https://cdn-images-1.medium.com/max/1600/1*vArRVCF1Yp3HQ-V5G04epg.png

Not with the built-in Automatic Layout, which wraps the GraphViz layout engine.

You can get some sense of its geometric scope and repertoire here: http://www.graphviz.org/Gallery.php 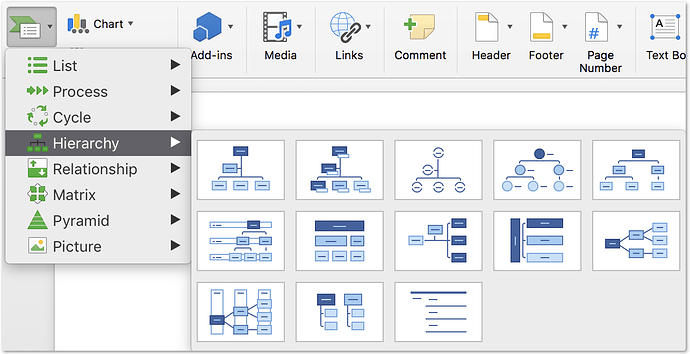 Attempting to get this within the “community guidelines”. If there is still anything untoward, please be specific, so that I can correct it. Otherwise the readership is prevented from knowledge of the important subject matter in this post.

Currently using the trial version for mac, is there any way to align the diagram in this manner?

Yes, it is a bit of a problem. There is some background to it, and separate parts to the problem, that must be understood. So please bear with me.

The notion of the hierarchy is being destroyed in the intellectual enslavement system that passes for “education” these days. The notion of equality is false; contrived; invented for a purpose (I won’t get into that here). The natural universe is an hierarchy, everything in the real universe exists in the context of that hierarchy. The hierarchy gives context. Context gives meaning.

Nothing in the real universe exists outside the context of the hierarchy. Therefore the attempt to equalise everything, to treat them “all the same”, is forced, it produces a contrived perspective of the natural universe, a non-real universe that is in denial of the evidenced facts of reality (schizophrenia). It allows each element to be viewed in isolation from the context in which it exists. This is the new “normal”, I have experienced it in my occasional tertiary level subjects recently.

Therefore the suppression of the hierarchy is great for those who have the intent of teaching people to be schizophrenic (to deny the evidenced facts of reality; to perceive elements in isolation from their existential context). But for humans who are not schooled in the new “education” system, for humans who want to do serious work, we want the context, the meaning, preserved, and we want it transmitted in the diagram.

There is no suggestion here that either OG, or the users of OG programs, are schizophrenic. There is a warning here, that the whole system is being destroyed, that young people are now being taught to think in insane ways, to suppress their natural abilities. This is well-documented in the academic literature, it is not merely an opinion, nor merely my opinion.

There are two ways that the hierarchy can be displayed, graphically:

This feature has been destroyed in OG 5.

So, to arrange elements in a tree, we have to regress to manual labour. Even if we have done that before, perfected it, and saved it as a DiagramStyle, and expect the Styles to work the way the dialogs and controls offer actions for them.

In my testing of OG 6, before I threw it out, due to (a) lost features, and (b) the masses of bugs, IIRC I couldn’t even find the DiagramStyles feature. I trust it went the way it was heading, down the gurgler, suppressed. This is one of those things that the folks at OG declare to be an “improvement” and a “new feature”, because the AutoLayout uses the GraphViz engine. Such a notion can only be postulated in staggering denial of the evidenced fact that the DiagramStyles feature has been removed.

I have not touched OG 7. I have neither the time, nor the patience required, for “user testing”. If and when it makes it to general release, plus one minor version (to reduce the bug load), I will try it.

A member of the community flagged a post in this thread for moderation. Upon examination, the flag was upheld. If the author edits their post to bring it into alignment with our community guidelines, the post will become visible again.

(In a nutshell, the community guidelines state that it’s okay to disagree; just do so respectfully. The problem in this case was with the latter.)