What productivity course for OF did you find most useful?

What OF course/system worked best for you?

I see courses about learning omnifocus on the internet and just not sure which one to pick. Anyone have any suggestions or can tell me about your experience? What worked what did not work?

The reason for me seeking this is I get all over the place and am ADHD so I can go into rabbit holes but also tend to come up with a new tagging/productivity system almost weekly!

So far I have seen these

https://learn.peterakkies.net/omnifocus-productivity/ - seems to be a combination of methods and usage of OF

https://www.kouroshdini.com/course-books/ - Creating flow with OF

https://learn.macsparky.com/p/omnifocus - more of a guide of OF, not so much of a methodology

I found reading the GTD book together with MacSparky’s course did the trick for me, and don’t forget the videos at learnomnifocus.com with our very own @timstringer :-)

Like @Janov I had read the original GTD book and half absorbed some of its principles. I really got a lot out of MacSparky’s course. It is more about the software that the system, but I ended up tweaking a lot of my system to be more MacSparky. Really recommend it.

I’ve studied Koroush Dini’s work extensively…
I recommend it above all else.
It’s definitely an investment in time and thinking, but I spent 2 years with OF before diving into Creating Flow w/ OF early last year, and it absolutely changed the way I did every thing.

Also check out Rosemary Orchard on working with Omnifocus 3

I would be embarrassed to admit exactly how much time, money and effort I put into getting OmniFocus to work.

My main challenge is how to see the trees in the forest. I was hoping to find a way to have the really important things pop up to the surface.

I signed up for Tim Stringer‘s Learn OmniFocus and got some good tips and even went so far as to have a individual session with him but we didn’t jell.

Following the GTD principles I ended up doing a brain dump and ended up with about 4500 tasks. Tim‘s recommendation was that I move a lot of those things out to another storage such as Evernote.

With my ADD it seem like it was just creating another bucket of things that I would have to manage and somehow integrate back into OmniFocus.

In an effort to get access to Brooks Duncan I joined the Asian efficiency dojo and spent $350 unfortunately they are spread quite thin and it largely it was a waste of time and money.

His recommendation for dealing with the overwhelm was to basically look at your long list pick out five of them and write them on a sheet of paper. That might be good advice but If I go back to paper then then I am going back to paper.

I purchased MacSparky‘s OmniFocus field guide and learned a lot about how to run the software and even some possible work flows but despite taking that course I still open OmniFocus and ask myself the question “What do I do now.

David discusses using the forecast method of assigning tasks to a day or deferring it to that day but I believe he’s moved on to Time Chunking but I’m not sure how he implements that in OmniFocus. I am going to email him and see if he has developed something that shows how to set that up.

MacSparky has indicated that the biggest question he gets regarding OmniFocus is how to deal with being overwhelmed by a large number of tasks. To the best of my knowledge his recommendation is to not put so many things in OmniFocus. To me that kinda defeats the purpose of getting it all out your head. If one keeps getting that question that might mean they don’t like the answer. I imagine that there is some way to hide Tasks that you want to capture but not work on right now.

One of the main things I learned from him was the importance of doing a regular review.

I am considering taking Peters course which starts shortly. Who would ever imagine that creating a daily prioritized ToDo list would be this complicated.

Get Stuff Done with OmniFocus 3

Learn a simple OmniFocus system that will make you more productive.

I need to do a bit more research on the course. It is not cheap. What I really want is 2 hours of individual consulting for $200 spread out in 30 min access over a month so that could get my questions answered quickly define things to try and the meet back and fine tune it.

It would be great if the Omni group hosted virtual training, maybe an hour a week where you could see what others are doing and how they set up their systems and workflows.

The other option would be for them to offer pre canned perspectives targeted at a certain type of user. At least it would be a place to start. Rather than have us do our own starting from scratch.

Just off the top of my head we could have one for:

Maybe we should Crowd Source this. The OmniFocus group could provide a web based location and define the contents of a Submission including, how to set it up and the perspective with a little bit of information on who this is designed for and offer $1000 prize for whoever gets the votes for the most effective workflow, in order to vote you need to contribute two dollars with the pot going to the best workflow. It could be a semi annual contest. The other option would be sell the workflow package. I would be willing to pay $2/per workflow to try several different Workflow/Perspectives

The course that I was referring to as expensive is 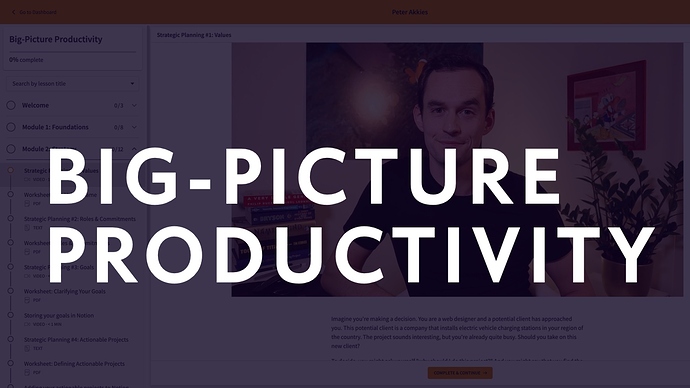 Clarify your goals and achieve them with this in-depth course.

Essentially $400 but when you signed up early it then included a group Q and A with Peter.

Read the manuals, start working out of OF with a small list of tasks, and try to think about where you’re actually disorganized vs. just reluctant to work. OmniFocus can only help you with the former.

If I had to recommend one book/course it would be Kourosh Dini’s, although I haven’t read it in about a decade.

https://www.kouroshdini.com/course-books/ - Creating flow with OF

A huge +1 for this, made OF an indispensable powerhouse for me.

My main challenge is how to see the trees in the forest. I was hoping to find a way to have the really important things pop up to the surface.

As you already have tried some expensive courses, there might not be a magic trick that works for you. My suggestion is that you:

If you try something like this, you can then ask yourself after a while if there’s something that doesn’t work as you wish, and then you can adjust your model until it does. This is something personal, and the great thing with Omnifocus is that has such flexibility.

@SteveU - THANK YOU so much for Participating fellow ADDer :).

I really appreciate you sharing your experience with Tim as well as Asian efficiency.

4500 tasks is quite a lot. I wanted to know whether you defined all those tasks well or were they just a brain dump that needs significant processing time to convert to projects and clearly defined tasks?

I imagine that there is some way to hide Tasks that you want to capture but not work on right now.

Defer dates (not excessively) along with Project Reviews along with the ability to place projects on hold are crucial.

There are 2 courses with Peter - for the one that is “Get Stuff with OF3” - I believe for $200 he gives an hour of consulting and the course. He had either advertised that on twitter or in his emails. It would be a good idea to ask him about this.

Re: The Productivity course - I am curious about that and since $200 is hard for me at the moment, I do not plan to spend on that course as of this moment.

I did buy Kourosh Dini’s book and it is very eye opening at the moment. I am going through it and am absolutely super happy as to how well it lines up with my brain. I still do want to hear other folks’ experience and am very curious about your upcoming experience with the Big Productivity course.

Following the GTD principles I ended up doing a brain dump and ended up with about 4500 tasks.

My advice would be: don’t throw all of that out of OmniFocus. You’ve actually done the hardest part which is putting everything that’s in your mind and bothering you into a trusted system (and sticking to that habit!).

Now you need to need to organise all those things, and build your personal conventions for daily and weekly workflows. I wrote up my suggestions for a starting point here: [Who has simple but powerful setups?]

@Jan_H’s recommendations above are excellent. This is very valuable advice:

You could use […] a tag that shows the tasks you have picked in a custom perspective that only shows those tasks – no more forest hiding the trees! […] You could also choose to show the tagged tasks in the Forecast view, after the due tasks. The tagged tasks may be reordered by dragging in that case too.

Start with a single shortlist and work exclusively in Forecast. Then add more layers to your pyramid of personal conventions. It’s easy to go wrong trying to apply all the techniques of “OmniFocus courses” all at once, because the right workflow and conventions will be slightly different for each person.

Agree. Kourosh showed me how to take OF to a new level. Specifically I recommend his “Creating Flow with Omnifocus”.

I’m soooo glad you asked this question! I am in the same boat as you and have also spent a lot of money trying to get it right with OF and can’t seem to nail down the best flow for me.

I found the answers here very helpful and I’m going to re-think my strategy. I spend more time messing around with OF than using it to get things done!!

By far, https://learnomnifocus.com/ with Tim Stringer.

@adamboettiger Could you give some more input on this? Would love to hear more about this.