White Rectangle in middle of screen in OF2 Big Sur

I know OF2 hasn’t received updates in a number of years, but I wasn’t running into this issue in Catalina.
Anyone else having this issue or know of a fix or a way to inspect that particular frame? 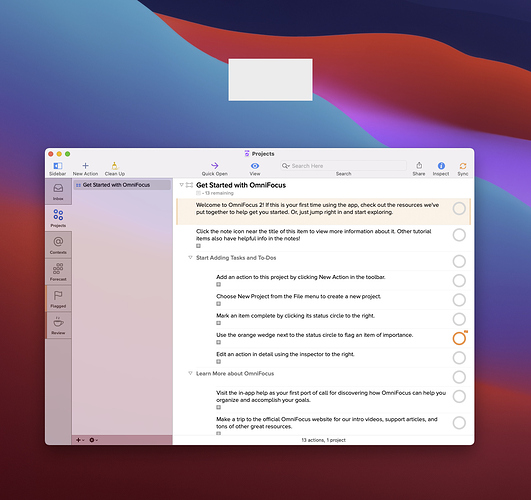 Edit: I did come across the Big Sur Compatibility post since asking this question. It doesn’t solve the problem, but it’s good to know that others are having it.

Do you mean version 2 or 3.10, which is the latest - and well worth upgrading to if you do. Good luck!

…OF2 hasn’t received updates in a number of years;

Yes, I’m having the same problem since updating to Big sur. My box comes and goes randomly. It must be a compatibility issue.

I mean 2. I’m migrating to Big Sur from Mojave, and tested it out on Catalina first with no issue. I don’t have the money available to spend at the moment, and OF2 has an interface that I like and a feature set that is complete. It would be a real shame to have to upgrade simply to get rid of a white rectangle, with no other added value (for me personally).

Mine seems to be there as long as OmniFocus is the active window. If I click out of it, the square disappears and then re-appears when I click back in.

Thanks for explaining, @tukelully! Understood.

In fact there are some major differences between 2 and 3 - most notably tags. To adjust your database for tags would be quite a lot of work, though. May I suggest contacting Omni support to see if they have a reason for the rectangle. It must be annoying. Good luck!

Ya, I did try out OF3, because I’m always curious. Maybe at some point it will be a reasonable upgrade for me, but I’ve sort of just returned to a simpler system that works for me, and would wait until that necessitates other features like tags. Repeating tasks would probably be the main refinement I’d be compelled by, but I’m not yet trying to make heavy use of them yet as to need an improvement. I contacted Omni, and hopefully there will be some resolution to this. As for now, they’ve acknowledged the issue publicly, but don’t have a resolution for it.

I’ve had the exact same issue since upgrading to Big Sur this past weekend. I also have not upgraded to OF3 and was considering it because of this very glitch and because I expect OF2 to not be supported the further out we get with updates. I have to move my window for OF around to bypass that white box as it covers up part of my data. Annoying, yes, but not worth $ … yet

I’m glad I’m not the only one! With OF3, I’m sure we both would have considered upgrading at launch if we felt it would translate to at least the same amount of value that we’re spending. I’m sure it does for a lot of people, but particularly if dollars are scarce, it’s tough to see how that is made up by the differences in product versions. OF2 is fantastic for relatively light needs. I could maybe understand a little more if the current version was 6 and I was still on 3, but even my ancient data recovery software hasn’t had problems between those versions.

yes, I am also having the same problem as yours. If you find any suggesstion tell me.

You are definitely not alone. Same issue here.

Same issue here. OF 2, Big Sur, white rectangle, only when OF is active window, but it blocks the OF window itself.

Yes - same issue. Annoying. Like many others, I have contemplated an update but, up to now, just don’t see the value - and really don’t like subscription models either. I was perfectly happy with OF as it was. I guess, at the very least, it spurs me to consider other project management tools if I am going to have to make a change anyway.

If Omnigroup not fix this bug we will not pay anymore for Omnifocus.
This is a simple bug!
They don’t fix it for us to buy version 3, which seems like a very bad practice to me. We don’t like companies like this.

I have to say, let’s give OG some credit: their record for fixing bugs and putting anomalies right is extremely good. These are difficult times… there will (I feel sure) be a good reason why this hasn’t been jumped on :-)

It seems 30 days ago the bug appeared…

@MarkSealey They absolutely do, but on the latest releases and the macOS generations those support (N-1, or N-2 sometimes)!

They will not fix this bug never.
Is it legal to force us to pay for the new version instead of correcting the bug?