How to make a new Adjustable Shape?

I’m relatively new to OmniGraffle, but I’ve been searching through the documentation and these forums and haven’t found what I’m looking for. Is there a way to create your own (custom) Adjustable shapes? As just one example, I’d like to independently adjust the size/aspect ratio of a Sloped Rectangle and the slope angle of the sloped side. In other words, I can resize the shape to be taller, but the position of the slope corner relative to its side length is fixed, and I’d like to be able to adjust it. I know I could draw my own sloped rectangle with a different slope, but it would again be fixed, and what I want is for it to be adjustable. And of course it would be nice to be able to make some other custom shapes with one or more adjustment points.

Is it possible to make these kinds of custom adjustable shapes? If not, is it part of the roadmap for future upgrades? Thanks.

Is it possible to make these kinds of custom adjustable shapes?

Yes, we do that all the time. I can’t think of any limitations that OG has that prevents “custom adjustable shapes”.

Sorry, but your description is not specific enough for me to answer in specific terms. If you supply precise technical details, I can respond with a more specific answer.

On the face of it, what you are requesting is ordinary, pedestrian functions that OG has.

The term “adjustable shape” tomn is using is correct. He refers to the 5 shapes in the second group in the shape inspector. These shapes show a double ring (“blue adjustment handles” according the manual) that can be moved around to adjust shape properties within the bounding box (eg. form of the arrows, thickness of the part between the arrows etc.) 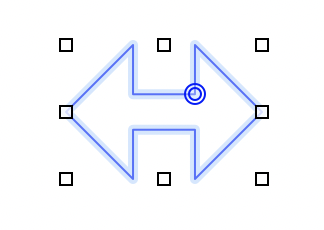 Unfortunately I don’t know how to create such shapes but I would like to do so too!

for example, an uneven trapezoid) where I could change the angle of one side independent of the object’s width & height

Much better, thanks. But not really clear (changing one side will change the Object height and width. Also, the area usable for text (most of the middle) will change, thus even after you get the Object shape and Stroke as desired, you may still have to change the TextArea to get your text to fit.

Thank you, now I understand.

“blue adjustment handles” according the manual

The manuals were bad to begin with, now they are falling off a cliff. Here the developer suffers from the same problem, being non-specific, and second, conflicting with the existing OG terms, out of ignorance.

Thus I reject the term “adjustment handle” for such Objects.

In order to maintain clarity, and to avoid verbose descriptions, I will use correct terms, first based on the English meaning of the word, and second the history of OG manuals and balloons (ie. not my opinion but the product terms), and give new labels to the new items (ie. my opinion). But the most important criteria is, it must be intuitive.

With reference to t_j’s example, a double-headed arrow:

I want to make a shape (for example, an uneven trapezoid) where I could change …

I use OG 5.4.4, your version will have a slightly different GUI, etc, but it has at least the GUI capability of V5.4.4, we hope. It may be in some other Inspector, you just have to find it.

I watched your video with interest. However the menu item Edit > Shapes > Make Points Editable is missing in OmniGraffle Pro v7(.18.5). After much poking around, I was unable to locate anything similar.

I would be grateful if anyone can point me to the correct menu location, if the command/feature has not been removed.

I was unable to locate anything similar.

I don’t have V7, but I do have the V7 “manual” (which is a pretty bad example of an OmniGraffle doc). It says there is a PointEditingTool:

I don’t know if that exposes the EditPoints in a Shape, but that is implied by the few words.

That is the solution, I believe. When selected, existing points on the shape become editable and additional points can be added. I’m uncertain whether this is equivalent to “Make Points Editable”, but it does seem so. The following shape began life as rectangle with rounded corners. 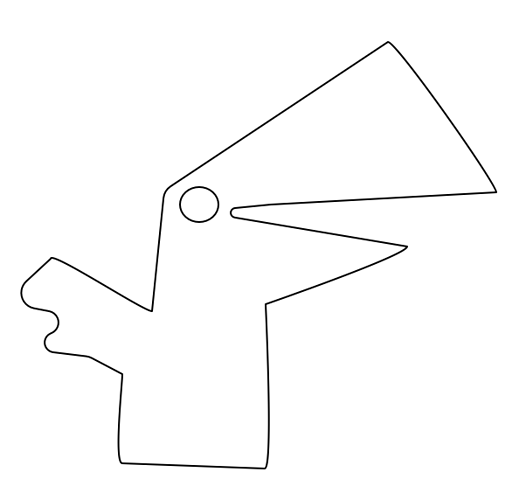